Modeling the Probability of Winning an NFL Game Priceonomics: Modeling the Probability of Winning an NFL Game

During this year’s NFL playoff’s we had a great picture of how these probabilities unfolded when the Indianapolis Colts ended defeating the Kansas City Chief after being down by 28 points fairly late in the game. At one point, the Chiefs had over a 99% chance of winning. They ended up losing.

The above graph shows us the 60-minute journey to the Colts’ 45-44 win two weekends ago. After a brief back-and-forth during the first quarter, the Chiefs looked like almost-guaranteed winners for most of the game. But then the Colts overcame a 28-point deficit in one of the biggest comebacks in NFL playoff history. The Win Probability model mirrored these momentum shifts.

So what is it that makes this model tick? Three major factors working in tandem:

Sports bookies begin each week by determining the point spread, and they decided the Colts were 2.5-point favorites. At the beginning of a game, because there is plenty of football left to be played, the odds of winning stay relatively close to what the bookies say. The Chiefs leading by 7 in the first quarter didn’t give us (or the model) enough information to pick a winner.

As the game progresses, though, the scoreboard becomes key. The model can tell us how likely teams in the past have been to win based on the current score and time left in the game. ESPN’s model is based on 10 years-worth of NFL play-by-play game data, which is a lot of plays. At halftime, with the Chiefs up 31-10, it calculated that they had a 96.4% chance to win. A team winning by 3 touchdowns at half is historically an almost sure pick.

Brian Burke at Advanced NFL Stats puts a lot this together in an interesting chart below. Assuming the team has possession of the ball, how likely are they to win based on the current score and how much time is left. 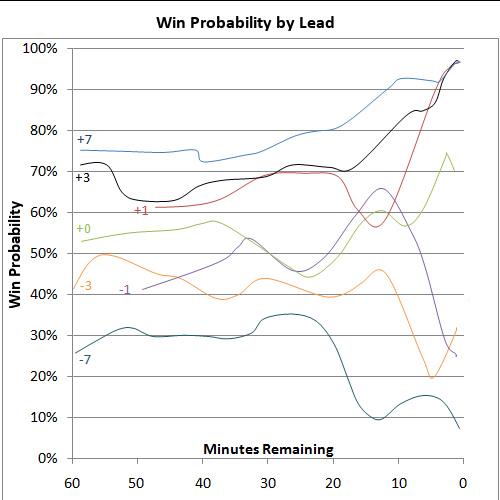 In this model, you can see at team that is down by one point early in the Fourth Quarter is actually favored to win. However, that advantage disappears when there are less than seven minutes left.

All this is to say that when the Chiefs were winning by 28 points during the second half of the game, they probably should have won. But they didn’t. Handling Corporate Events Amidst the Pandemic: Pros & Cons of Virtual Conferences
Ready to move your sales to the next level ?
Start your free trial now.
MoData's AI-powered sales intelligence software provides you with actionable insights, predictions and prescriptions to help you grow revenue, faster.
Get MoData Free →
This website uses cookies to improve your experience, both on this website and through other media. I Understand